Turn on suggestions
Auto-suggest helps you quickly narrow down your search results by suggesting possible matches as you type.
Showing results for
Search instead for
Did you mean:
Sign In Help
Sign In
Options
AshleyCollins
Scholar

I've been watching NOWTV via the Chromecast function on my new Sony Android TV (KDL43W755CBU). It works really well apart from Live Streaming Sports. The loading icon stays even when the stream is running. I restarted many times over the weekend during the US Open Golf but it always stays.

The problem is not there via my standard Chromecast on another TV.

I'm attaching a picture of how it looks.

Android TV5.0 has brough Google some issues With Googlecast, the hardware is not the same as chrome cast... and this means the streaming is not actualy the same...

Be aware NowTV is NOT part of the Sky dish subscription but they support chromecast... so users here are unlikely to be able to fault find it due to how new google cast is...

Currently moving chromecast to Googlecast means apps are having issues... with googlecast...

The app May just not work well with googlecast currently on any thing but nexus player and changes server side may be needed for TV hardware...

Nexus player users had google cast issues when it released...

Interestingly, I see the iTunes store description for the NowTV app v4.7 from 14th July says:

You can now cast what you're watching to a whole new bunch of devices that are GoogleCast compatible, like the new Android TVs."

Does that mean this bug should be addressed soon? I've tried the latest version and it still happens...

I had the same experience this weekend watching football on my Sony KDL50W805CBU Android TV.

It's a massive shame because the picture quality behind the spinner looked pretty good even on a 50" TV.

I've made a video of the Chromecast and Android TV side by side:

So close to being perfect. Please NOWTV devs, surely it's just a code tweak away 🙂

My Android TV is up on the wall with full LAN connectivity. I don't want to hang cables and other devices all over the place. 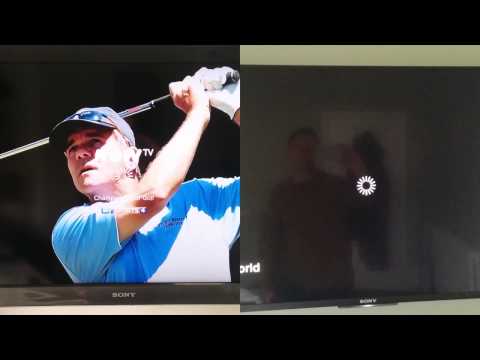 I have the same issue with the Nvidia Shield Android TV box, which has the GoogleCast functionality. In fact, the behavious has changed slightly after the recent NowTV update. Whereas it just used to show the same spinning icon issue, it now does it for a bit, then bins off to the main Android TV menu.

Sounds like the same issue, which hopefully Now TV will resolve. I would log it as an issue, but will get told they don't support GoogleCast / the device (especially as it's not available in the UK yet), only Chromecast etc. etc.

Sorry about the delayed reply.

Can you all try and uninstall, re-install the app on your remote devices, such as iPad, iPhone, Android?

Can you also restart your wireless router while your TV is shut down? Also make sure the versions are up to date.

If the issue continues, please let us know and we'll let out tech team know.

Great to hear that someone from the tech team will take a look. It would make me very very happy!

0
Reply
Anonymous User
Not applicable
In response to AshleyCollins

Thanks for getting back to us, sorry that it still persists. Seems like it's got you a spin 😉 sorry for the pun. I will need to ask the tech team about this one and get back to you as soon as I can.

Apologies for the inconvenience caused and thank you for your help.

I logged it as an official fault, but received the expected response "not an officially supported device for Now TV". I know this (and accept it), just trying to give some useful feedback to your tech guys. Many other entertainment app providers had to make a couple of very minor changes to ensure the app was GoogleCast as well as ChromeCast compatible. In fact, you've already made minor tweaks to make it work on the Nexus Player GoogleCast function. With so many more Sony and Philips Android TVs (as well as other Android TV set top boxes) with the GoogleCast built in technology, which your app seems to think IS a compatible Chromecast(it's stolen the last registered device slot on my list), I'm hoping it's something you can fix easily enough, to keep me subscribing...

Whilst we're at it, an actual dedicated Android TV (which would cover the new Sony + Philips TVs, as well as the upcoming STBs) compatible app would be even better, but I'll settle for fixing the Chromecast / Googlecast issue for now

Thanks for the feedback and information. I can confirm that the tech team are looking into this and we will be in touch as soon as we'e been able to investigate. Apologies for the inconvenience and thank you for your co-operation whilst this is being looked into.

I have some good news! Our technical team was able to replicate the issue and are working on a fix.

I'm not sure when this will happen, however we'll keep you posted.

Sorry about the delay and for any inconvenience this may have caused.

This seems to be working now for me. The loading icon no longer stays for live streams.

Not sure if a fix has been rolled out on the Now TV side or if it was the last set of software updates from Sony for my Android TV (around 13th October).

2
Reply
Anonymous User
Not applicable
In response to AshleyCollins

It's still not working for me (not a Sony TV, but the Nexus Shield Android TV device) using a live stream from the Entertainment Pack. Will be good to hear if it's working on everyone's Sony, as this would be good news for sure.

Can you make sure your software is up to date?

Can you tell us the exact model of your TV and software version please? Does it only happen with Live Entertainment or have you noticed it with other Live streams too (Sports, Movies).

It's not a TV (I posted in this forum because at the time this thread didn't exist http://community.nowtv.com/t5/Chromecast/Casting-Crashes-Fails-with-Nvidia-Shield/m-p/332931 ) and it appeared to be the same problem (and similar to the Nexus Player STB issue which you guys fixed before). With the Sheild being the newly release top-spec Android TV box, and selling like hot-cakes, it'd be great to solve it like you have for the Nexus player (and maybe the Sony Android TVs).

The box is the NVidia Shield Android TV box, which runs Android TV along with GoogleCast functionality (same as the Nexus Player and Sony Android TVs). The software version is 2.1 (the latest) and it has the latest Google Cast Receiver update (October 17th) installed. I have the latest version of the Now TV app (yesterday's 4.3 release) installed on my Android phone, and I have tried casting from both my phone and tablet.

Just to confirm, the device correctly registers in one of my four available slots (seen as a Chromecast) when I try to cast, the screen goes to the Now TV cast screen, as expected. It then changes to the content specific screen (i.e. episode relevant screen), the circle spins as though about to cast, but then just exits back to the main menu.

This happens with Live Entertainment and catch-up Entertainment. I've not got a Sports or Movies pass to be able to try this, I'm afraid.

If you want any more information, or even logs etc. I'm more happy to help, as it's so frustrating not working. I'm even happy to send you the box for a week or two if that would help

@Anonymous User your issue is different to that of the Sony TV, see the photo in the early posts. These devices could play the content, just had the loader remains on the screen.

I suggest you start a new topic.

Serves me right for not reading the first post correctly - read the "spinning wheel" bit, but completely missed the fact the video was working behind it.

Glad it sounds like you Sony guys are fixed anway.