Ok so I've just purchased a Google TV device (HD version, £34 from Google store UK) for at my girlfriend's device as got my own at my place and find them pretty good.
I was surprised but please to see that the Sky NOW TV app was available to download directly from the app store (no developer mode/side download etc req)
I downloaded it, signed it, works perfectly, happy days.

Back at my place today and go to download the app to my other device but it doesn't show up when I search for it. My device is the 4k version, totally up to date and connected to standard BT internet with no VPNs set up.

Any idea what's going on here?

The app is now available on 4k version as of today!

You may be better off asking the question directly to NOW themselves than a customer to customer based Community Forum.

Use the email address in the screenshot below to ask the question.

Leighton
Mentor
In response to schnapps

So I emailed the customer support And they were absolutely useless, didn't seem to grasp the problem and suggested I wasn't casting from my device correctly 😂

Apparently Google will be updating the older devices to version 12 in the near future so fingers crossed when that happens the Now TV app will be available.

redchiz1
Elite 2
In response to Leighton

To be honest I don't understand what you mean by a "Google TV device?"

Leighton
Mentor
In response to redchiz1

The 4K version has Android 12 via a recent update so, as per the HD version, there seems no technical reason why Now shouldn't allow the app to install on the 4K version.

Oh, well that really shouldn't be a problem? Are you able to use the NOW app on the device in question without casting?

No-it’s never been available for this current iteration of the Chromecast (w/Google TV).

Guess it was a pipedream.

Hey all, here's the image of the Now App on the latest 4k device 🤷🏻‍♂️sorry first time adding pics Leighton
Mentor
In response to Leighton

Apologies, the images are from the new HD model Chromecast not the older 4k model. Hopefully a compatible app will come to us early adopters in time.

Seems strange why its available for the HD model released the other week and not the 4k version?  I picked up a 4k version a few week back and am disappointed that one of the most popular streaming sticks is not supported for some strange reason seeing that every other streaming stick is.

Can this be looked into by the app development team please 😄

I also just emailed the developer via the contact link on the google play store.  Asked about an update, so will post back if i get a reply.  Suggest everyone else msg`s them to and we might get somewhere with a solution 😄

SHartigan
Advocate
In response to Hodge

I'm in the same position, I have two Chromecast with GoogleTV, the HD model, and the 4K.

The Now app was available in Google Play on the HD out the box, but not on the 4K (even side loading, it won't work).

The 4K was running Android TV 10, and has recently updated to 12 to match the HD, but Now still won't work/show, either side loaded, or via Google Play.

Maybe this is the problem?

I'll do the same as Hodge and also use email the developer to add my support for this change/fix, and post any response I get here.

Just went to look up the developer contact details from the Now app on the Chromecast HD and noticed ...

So yeah, most likely we'll be waiting until Google Update the 4K to a later version of Android.

Still, no harm asking for further backwards compatibility in the app, so will ping them an email 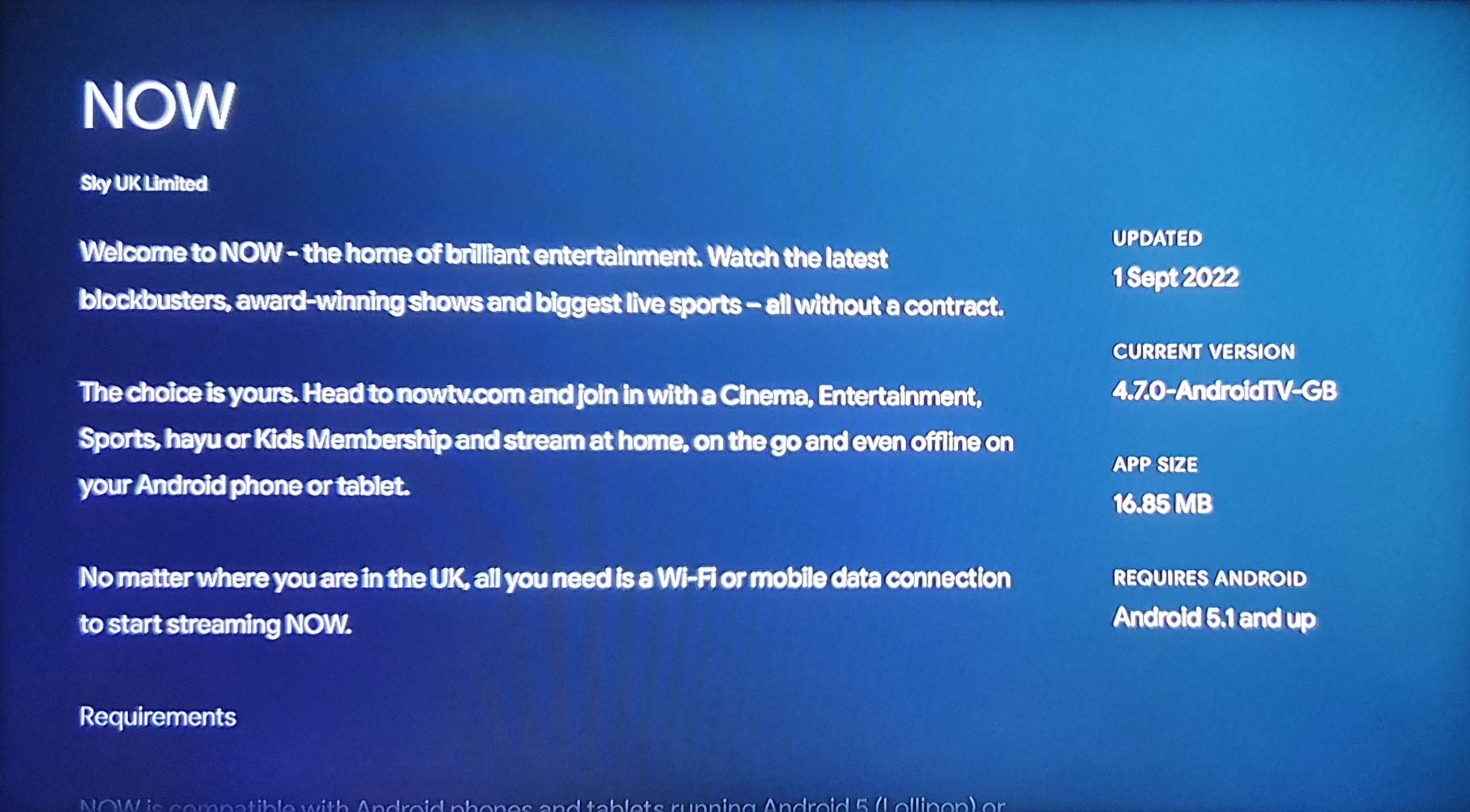 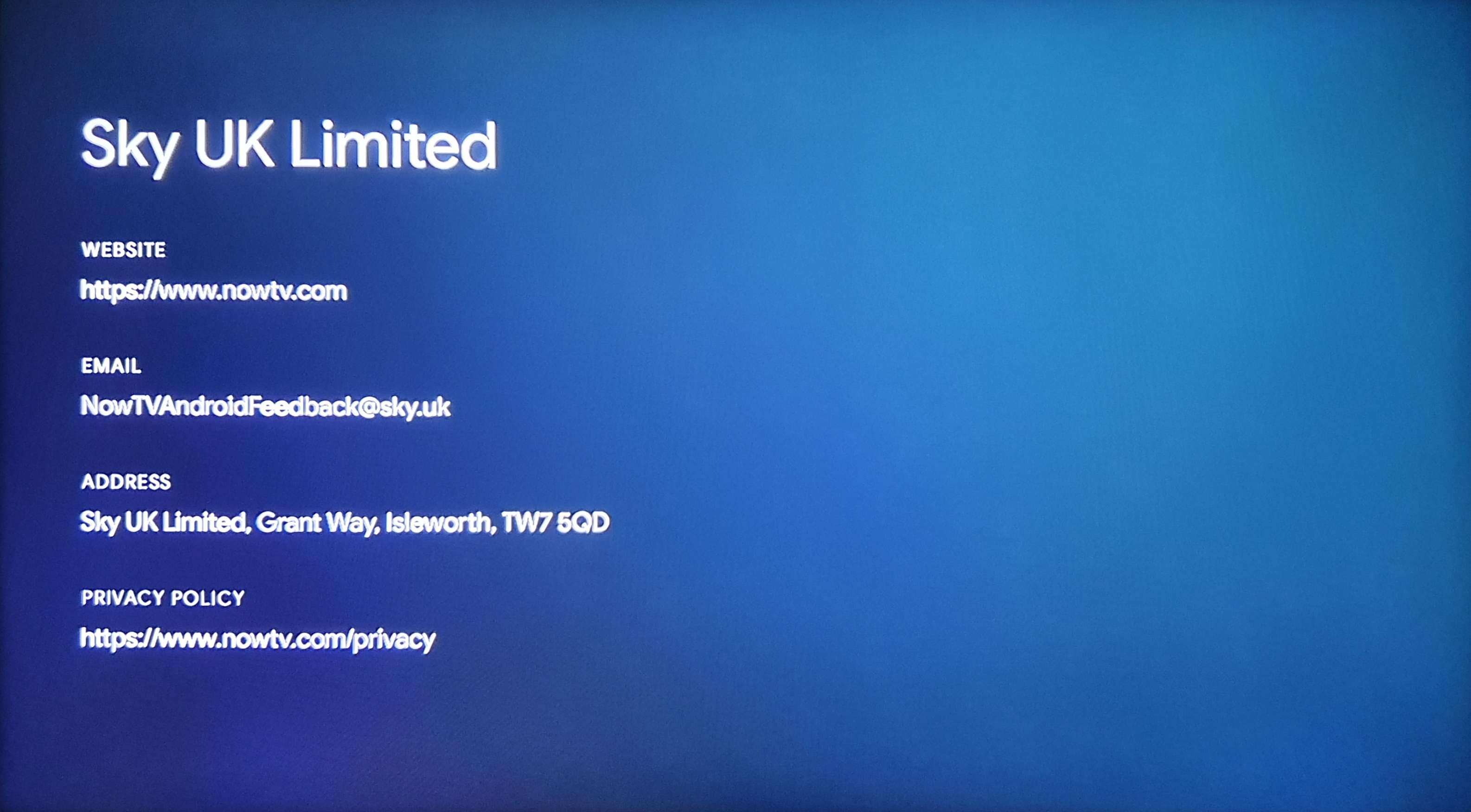 slater143
Mentor
In response to SHartigan

Ccwgtv 4k is running Android 10 out of the box with a recent upgrade to Android 12 also available - the same as the hd version.

Android version isn't the issue here, although I'm not sure why they would make the app available on one and not the other. Hopefully just an oversight

Ceejay_London
Scholar
In response to slater143

This must surely be an oversight - the developer hasn't put the device ID for the 4K model into the app so the app store does not show it for download? My 4K device has Android 12 installed since yesterday and Now is not coming up for download.

Fwiw, I managed to sideload the apk onto my 4K Google TV with no issues.

Its a shame that people have to go to these lengths just to get their app onto a device but there you go.

Where did you find an apk that works on the 4KGTV?

I extracted it from the HD Chromecast.